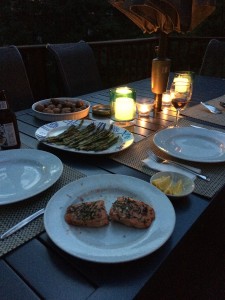 With a name like “Grilled Orange-and-Bourbon Salmon” how could I not try this Cooking Light recipe? And I’m glad I did; it’s terrific. In fact, I prepared this recipe several times this summer — with both salmon and Arctic Char, of course — to test it out for a Cape Cod family vacation dinner-for-16 (yes, cooking dinner for 16 in an only-ok-equipped rental cottage should not be part of anyone’s vacation – but somehow it is for me!)

Here’s what’s great about this recipe: it’s easy to make in general and for a crowd, it’s flavorful, and is a healthy choice.

At the height of summer grilling season, you may be looking for an alternative to salmon. For those lucky enough to easily find it locally, Arctic char is my grilled fish of choice.

Actually, it’s my cook-at-home-all-year-round fish of choice for three reasons:

Baked Char or Shrimp Scampi with Spinach and Lemon

Recently, we had a bunch of family visiting with a wide range of palette preferences (meaning some would eat fish and some would not). My mom and I decided to make some chicken thighs in the crock pot for those who might not like fish, and I headed off to my favorite fish wholesaler, Pagano’s, to buy enough fish to feed 10-12.

At Pagano’s I decided to buy about 2 pounds of my favorite (and healthy) fish, Arctic char, and another 2 pounds of salmon (which I do not care for) and conduct a very informal taste-off. I prepared both the same way: first I generously salted each fillet, 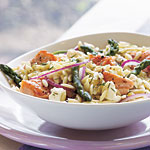 With my eating habits in the doldrums, I needed inspiration…and found it in the March issue of Cooking Light.  After spending a half-hour paging then surfing, I stumbled upon this recipe – then headed right to the store.  Turns out, it was so good that my son actually ASKED to try some!

Even though I don’t really like cooked salmon, I found this recipe delicious as well as low-fat & low cholesterol.  Plus, it’s easy & a nice change from the ‘heavy’ one-pot recipes I’ve been trying (not posted because I haven’t liked a lot of them!)  In truth,