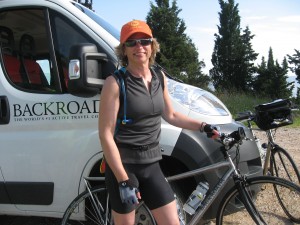 Daily exercise is a key part of lowering cholesterol without medication, and in the long, cold winter months, my exercise of choice is tennis (and my real exercise is spin class.)

For those who’ve not tried it yet, spin class is an amazing cardiovascular workout.  Some shy away because they’ve heard it’s intense…and it can be. But it doesn’t have to be – if you’re curious, drop by your local gym or spin studio and try a class.  First class is often free and – like yoga – it’s best at least at first to go at your own pace and don’t worry about what everyone else is doing. 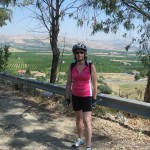 After huge flight delays that caused multiple missed flight connections and lost luggage (not 1, not 2, but 3 lost pieces of luggage for our group of 4 – we will never fly Alitalia again!), we made it to Sicily & Rome and back.

As mentioned in my last post, I was pretty worried about biking in Sicily still coughing from the delightful pneumonia side effect of ‘reactive airways.’  But all was fantastic. I didn’t power up the hills (yes, like the ones in the background of this photo) the way I’d have liked, but I didn’t have to walk my bike (much) either

From a lo-co lifestyle perspective,