Who  knew there was a National Cholesterol Education Month?

Not me, and I, um, write about cholesterol.  Weekly.

As a marketing professional, this is distressing. As a writer, I can’t believe it took me until September 29th to pen a post about September being National Cholesterol Education Month.

And no, it doesn’t get any ‘ringier’ the more I type “National Cholesterol Education Month.”

How about this: NCEM.

The Trick To Steaming Whole Fish

As a means of communicating with professional cooks who write interesting articles with accompanying, tantalizing recipes, absolutely nothing beats Twitter.

Two of my favorite New York Times Dining section authors, Melissa Clark and David Tanis, both respond to questions about their recipes via Twitter.

They don’t know me. But when I query them via Twitter, both answer.

How amazing is that? You try a recipe you’ve clipped from the NYT, have a question, and simply post your puzzlement to the author via Twitter – and voila, you get an answer. Huge kudos to Melissa Clark and David Tanis for taking the time to respond to readers.

Who knew that dropping off your one and only child at the airport for his freshman year of college would spark a spate of eating dinner out every night since he’s been gone.

We dined out even though I actually drove myself across town to Stop & Shop and purchased ingredients for 2-count-em-2 dinners. (I have just now trashed the fresh kale, broccolini, and already-skewered teriyaki skewers purchased on Monday; luckily the turkey polska kielbasa will hold. Probably indefinitely. Which is a scary something I need to consider as my Hillshire Farms turkey kielbasa obsession rages on.)

On my son’s last next-to-last-night at home, 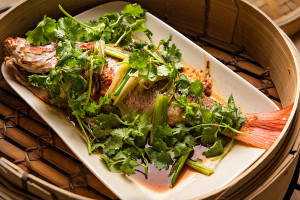