Better Than Salad at Wendy’s

Dining out lo-co can be a challenge – especially if you find yourself at a fast food joint. Yes, of course, you shouldn’t be there, but if you are going to dine fast-food style (and you know you are), there are some good lo-co choices.

And it’s not just salad anymore.

Last week, my son and I were finishing up our it-feels-like-1000-doctors-he-has-to-see-before-he-leaves-for-college expedition, and we had 2 appointments in one day and an hour to kill.  And it was lunchtime.  Naturally we went to Wendy’s.

Now, I was all set to order their Apple Pecan Chicken Salad,

Cholesterol Tests Your Doctor Hasn’t Told You About

A standard cholesterol lipid panel  provides four measures: Total Cholesterol, LDL Cholesterol, HDL Cholesterol and Triglycerides.  But did you know that there are two other blood tests — and one ratio that’s easy to calculate — that can better predict your risk of heart disease?  Which means that even with high cholesterol, you might not need a statin medication if these tests show low cardiac disease risk.

Or you might think you don’t need a statin … and in fact do.

And yet, your doctor probably has not told you about these tests.  So let me.

As I mentioned in last week’s ‘Erasing Onion Rings with Salad‘ post, dinners at our annual week-long Cape Cod family reunion involve several multiple-family, how-is-it-vacation-if-you’re-cooking-for-12? style dinners.  Though all are fun (as long as it’s not your night to cook), from a lo-co perspective, some (the fish dinner) are um, far healthier than the others (steak, ribs, lobster).

But it’s more than just the cooking-in family dinners.  There’s also the one night all 12+ of us troop out to a fancy restaurant to celebrate the summer birthdays and anniversaries. This year we went to l’Alouette – a self-described french bistro in Harwich, 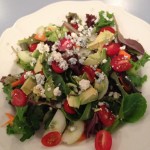 Every summer, we rent a house in Cape Cod for a week for a family reunion with my husband’s family.  With a whole family of foodies, our traditions run the food gamut from the very NOT lo-co joy of Liam’s onion rings (must be scored within 24 hours of arriving on Cape) and the Chocolate Sparrow (thank goodness they do not exist at home) to the also-not-lo-co family dinners we take turns hosting.

There are now 3 home-hosted family dinners in one week:  first is the lobster & rib dinner at my in-laws (one brother-in-law has ribs flown in from Montgomery’s in Cincinnati –