Everyone knows oatmeal is a cholesterol-lowering food. But frankly, oatmeal leaves me cold. The consistency kind of grosses me out, and it reminds me of poor, sad Oliver Twist holding out his porridge bowl.  And that is no way to start every day.

So I reverted back to my 1/2 bagel-with-smidge-of-cream-cheese-and-lox daily breakfast. True, the momentary culinary delight gives way to guilt over skipping the holy grail of cholesterol-lowering foods. But I’ve made peace with that.

Or I had – until I realized my next 6 month cholesterol check is not so far away. And with no daily oatmeal, 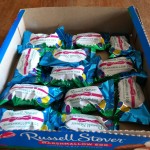