So what I was hoping, while on vacation, is that I’d post about the challenges and triumphs of going lo-co on vacation.

Instead, my lo-co plan went on vacation.

Want to know what total food meltdown on vacation looks like?  Well, it starts with having Eggs Benedict TWICE.  (Apparently, I am a room service slut – thank goodness we rarely stay at wonderful places like this one in Southern California or I’d be on cholesterol meds in like 3 seconds flat).

So far on this trip, I’ve managed just 2 lo-co meal choices.  For all other meals these past 8 days I’ve made choices like these totally NOT lo-co meals: 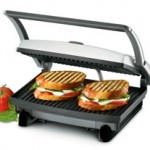 Kitchen gadgets are big in my family.  Though truth be told, I’ve gone a bit too far.  Like, approaching hoarders territory.  I can’t believe I’m going to admit this, but we have a ‘magic closet’ where the oh-so-many large and/or not-often used cooking tools live (like my stash of huge, medium, small and mini crock pots – yes I have 4, yes that’s embarrassing.)  It’s like a clown car in there.

But by far, the most fabulous kitchen gadget I own is a panini maker.  It is not jammed in the magic closet – no siree!  My wonderful Cuisinart Panini Press has got pride of place,

To lower my too-high cholesterol, I’ve been focused on eating low-fat, low cholesterol foods and getting more fiber.  And trying (relatively unsuccessfully) to exercise near-daily.

Apparently, that’s not enough.  Apparently the fact that I’m a sugar junkie is a real cholesterol problem.

I learned this from Gary Taubes’ extremely well researched (and scary) article in the New York Times entitled, “Is Sugar Toxic?”  In a nutshell, the premise is that sugar does far more than cause weight gain/obesity and diabetes…that sugar itself is a toxin, when eaten (at typical American levels) over time because it causes metabolic syndrome,

A month ago, I had never heard of quinoa (keen-wah).  Then I tried some made by a local chef and wham, now it’s everywhere.  OK, OK, I know – it’s not everywhere, really — it’s simply that now that I’m aware of it, it just feels like its everywhere.

Except that, truly, I think it is.  This feels like a bona fide foodie trend.  It feels like quinoa is actually becoming ubiquitous.  At least in Metro NYC.

Because how’s this for funny: I made this Black Bean and Tomato Quinoa recipe for a pot-luck dinner party and someone invited at the last minute (ie,